Please visit my other CCC blog!

A NOTE FOR YOUNG SCHOLARS.

The internet can be a useful tool for research and writing. The internet can also be a dangerous place - particularly the world of blogs and blogging - if used unwisely.

What you see here on the Civilian Conservation Corps Resource Page will pertain to CCC history and research. No such promises can be made if you navigate away from this page. You should always use the internet with parental permission and supervision. 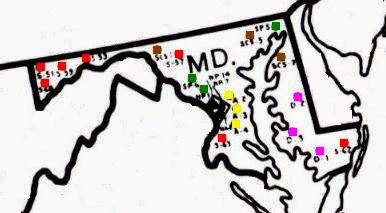 Maryland is in the 1st Corps area, and in close proximity to Washington, DC.  A good deal of CCC work was undertaken in this relatively small state, which may be due in part to the fact that Maryland is so close to America’s seat of government.  No doubt CCC projects in Maryland made for appealing public relations visits for senators and congressmen and they probably served as suitable examples of how the CCC funding was being put to good use.

The Federal Security Agency Annual report of the Director of the Civilian Conservation Corps for Fiscal Year Ended June 1942 includes a detailed accounting of the work done by CCC enrollees at the Beltsville, Maryland Agricultural Research Center.  The report is significant enough to warrant a full quote here.  The account begins on page 55 of the report and reads as follows:

“Beltsville Agricultural Research Center
At the Beltsville Agricultural Research Center, Maryland, are carried on agricultural-research projects and numerous field experiments of the various bureaus and agencies of the Department of Agriculture.
This area includes specific areas assigned for experimental purposes to the Bureaus of Animal Industry, Plant Industry, Dairy Industry, Entomology and Plant Quarantine, Food and Drug Administration, Forest service, and Soil Conservation Service, all of the Department of Agriculture; Biological Survey of the Department of Interior since June 30, 1939, and the Bureau of Standards of the Department of Commerce.  The Center has been the scene of an intensive CCC program since October 1933.
While work projects on the Center are similar in type to the general CCC program, a rather heavy program for the development of the whole area and particularly roads, fences, water and sewer lines, shed construction, grading operations, and landscaping, was carried on by the CCC.
The first CCC camp at the Research Center came in October 26, 1933.  In 1934 another was assigned and in 1935 two more.  One company went out in October 1936, three continued until 1942, and the last one closing on July 21, 1942.  In October 1941, the Plant Industry Camp (NA-1) at the national Arboretum, was transferred to Beltsville supervision; it was closed however in December 1941.
From early 1941, one of the camps while still quartered at Beltsville carried on national defense work at Fort Meade, Maryland.  From February 1942 to its closing, another Research Center camp devoted 60% of its work to Fort Meade projects.

Accomplishments
For the fiscal year f1942, the major CCC contributions have been the installation of pipe lines, construction and maintenance of roads and parking areas, razing undesired structures, seeding and sodding, landscaping and soil conservation work.  This work is of considerable value, when viewed as part of the nine-year camp program at Beltsville.  Since 1933, the camps have constructed 39 bridges, 49 buildings of various types, over 65 miles of roads and trails, 29,000 square yards of parking areas, and 12,000 feet of walks, erected 130,000 rods of fence, installed 174,000 feet of water supply pipe lines and 309,000 feet of other pipe and tile lines, planted 78,000 trees and shrubs and seeded or sodded over 700 acres, done20,000 man-days of nursery work, 3000 acres of general cleanup, moved many thousands of cubic yards of earth incident to grading operations and performed many other operations of great importance to the Center.  Not only have these accomplishments been of value to the Research Center, its many participating units and the Department of Agriculture, but also much valuable job training, experience and related education has been provided many young men (mostly from rural areas) in these camps and this uplifting influence undoubtedly has and will pay substantial dividends in the form of better men and better workers so essential to the nation in this time of need.”

For a terrific history of the CCC in Maryland, click Here.

For more photos of the CCC at Beltsville, Maryland, click Here.

Maryland is also home to a CCC project that, over the years, has come to be a place of national importance, even if most Americans have never been there:  Camp David in the Catoctin Mountains.  A National Park Service brochure for Catoctin Mountain Park notes that in 1935 more than 10,000 acres of land in the Catoctin Mountains were acquired by the federal government for development as the Catoctin Recreational Demonstration Area (RDA) with the goal of finding new uses for marginal lands.  (Prior to the advent of the CCC, the Catoctin’s had been exploited – overused, really – for the production of charcoal, which involved clear cutting of forest, stripping of bark for tanning and general logging work.)  A list of National Park CCC camps published in The Civilian Conservation Corps and the National Park Service, 1933-1942 shows that the Catoctin RDA was home to Camp NP-3 (formerly SP-7) during enrollment periods 14, 15 and 16 as well as camp SP-3 for an unspecified period of time.  Part of the purpose behind the work in Catoctin was to develop recreational areas for the enjoyment of the people from nearby urban areas, including Washington, DC.  According to Ren and Helen Davis in Our Mark on this Land, the WPA laid out the park and constructed the camp facilities while the CCC, beginning in 1939, undertook reforestation work.  One interesting component of the CCC work at Catoctin Mountain Park noted in Our Mark on this Land is the work of CCC enrollees to collect old fence posts from within the boundary of the park for use in reconstructing fences in Gettysburg National Military Park (where the CCC also worked).

While the bulk of Catoctin Mountain Park is accessible to the public, Camp David is decidedly not open to the public and indeed there is even a no-fly zone imposed in the airspace over Camp David.  I know from personal experience that visitors to Catoctin Mountain Park may drive within close proximity of Camp David without even knowing it.  The following information about Camp David comes from the book, The President Is at Camp David, by W.Dale Nelson.  What is now Camp David, was originally known as Camp #3 or Camp Hi-Catoctin.  With an elevation of 1,800 feet, the location landed on a short list of sites deemed suitable as a presidential retreat for President Roosevelt in 1942.  At that time, the camp, which had been intended as a recreational facility for families, included three units of six four-cot cabins, a swimming pool, craft shop, and playing field along with an office, showers and recreation hall.  The Secret Service would eventually occupy a former CCC barracks, which FDR christened “221B Baker Street” after the fictional abode of Sherlock Holmes.  The Secret Service agents called the barracks, “The Long House.”

Paige’s book on the CCC and the National Park Service lists all of the park service CCC camps in Maryland:

The work of the CCC at the Chesapeake & Ohio Canal National Historic Park is also worthy of note in any discussion of the CCC in Maryland.  Companies 325C and 333C, composed of African-American enrollees from the urban centers of Philadelphia, Baltimore and Washington, DC, worked to clear the historic canal alignment of debris and remove vegetation from the tow path.  They’d managed to complete work on 22 miles of canal before the U.S. entered World War and work was terminated.  For details of this project, including a photo, see Our Mark is on this Land.

Happy Days, the CCC’s national newspaper, reported on the deaths of at least five individuals affiliated with the CCC between 1933 and 1940:

Harry E. Jackson, an enrollee with Company 335, Brandywine, Maryland drowned and the tragedy was reported on page 16 of the June 27, 1936 issue of Happy Days.

Enrollee Albert Barnes from the Beltsville, Maryland camp was killed en route to a fire.  Barnes company number is not listed but his death was reported in the November 21, 1936 edition of Happy Days.

William Taylor, an enrollee in Company 2314 at Beltsville drowned, as reported on page one of the Happy Days issue of July 9, 1938.

Another Beltsville enrollee, Abe H. Kelly, also of Company 2314, was killed in an automobile accident while on leave, according to the October 7, 1939 issue of Happy Days.

Harold F. Kurtz was a U.S. Forest Service CCC inspector who was killed in an auto accident according to the October 14, 1939.  It is unclear whether Kurtz was somehow affiliated with the Rockville, Maryland CCC camp or if, perhaps, the accident occurred in Rockville.

We’ll close the Maryland entry for the State-By-State series with some enrollment and work statistics from the Annual Reports for 1937 and 1939. The Annual Reports are a terrific resource for things like overall enrollment by state and numbers of individual tasks completed, however there isn’t any information pertaining to specific work at individual locations in the various states.  Nevertheless, it’s interesting to compare work totals from year to year and to speculate as to why the numbers might have fluctuated from one report to another.

Sources
Davis, Ren & Helen, (2011), Our Mark on This Land: A Guide to the Legacy of the Civilian Conservation Corps in America’s Parks, The McDonald & Woodward Publishing Company.

The photos of the Beltsville, Maryland CCC work are United States Forest Service images from Stan Cohen's book The Tree Army: A Pictorial History of the Civilian Conservation Corps, 1933-1942.